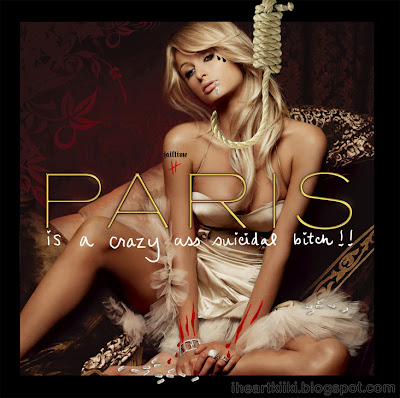 Paris Hilton was sensationally released from jail after serving only 3 days of her 23 day sentence over fears that she was suicidal. Law enforcement officials state that her condition was psychological and that she was in peril of having a nervous breakdown. After a psychiatrist visited Paris in her cell twice in the past two days, word was passed to the Sheriff's Department that her mental state was at risk, and she has since been released.

I can see it now. Four days ago, Paris sat down with her lawyer and mom before going to the mtv movie awards and they carefully instructed her:

"Okay now Paris. Around day three, start acting really nuts. We know you aren't so good at acting. But just try, okay? We'll get you outta there."

Paris will serve the remainder of her sentence: House arrest for 40 days at her four-bedroom, three-bathroom, Spanish-style home above the Sunset Strip. Life's gotta be tough for an heiress. Money seems to buy your way out of anything...