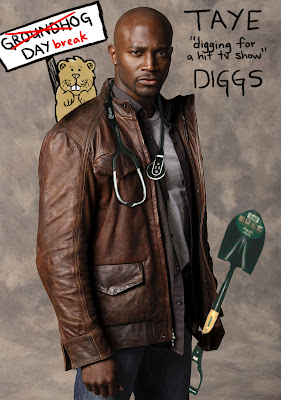 abc has climbed my ladder of television successes recently. although they have a notch against them for airing national bingo night. unless they can recreate the smell of old people and cigarettes in your own living room, this show is pointless. but let's get to the point... taye diggs. at least we can thank judas that abc pulled his show daybreak off the air last year and made it an internet only show. (yeah, that show where he wakes up everyday to find out he's re-living the same thug, car chase, murder filled day until he gets his day right and punxsutawney phil comes out of his hole for spring....wait a minute...) but that taye diggs sure is just searching, begging, pleading, & "digging" for a hit show. they've signed him onto the greys spinoff (hold on a moment while i vomit) private practice, which i think i can safely say we're all dreading and cursing shondaland for.