Why did Stephen Hawking cross the road? 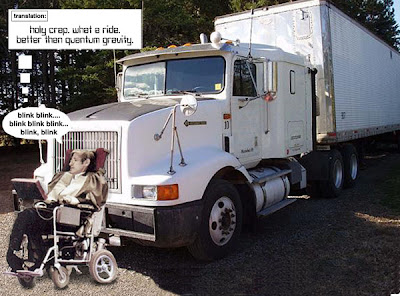 Stephen Hawking was crossing a highway in his wheelchair when he became stuck in a semi-trailer's grille and was pushed for miles before the unknowing driver was pulled over, police said on Thursday.

His wheelchair became hooked onto the front grille of the truck, which reached 50 mph during the 4-mile trip down the highway. Witnesses reported that the light turned green, so the truck took off, never seeing the wheelchair in front of him.

Hawking's deteriorating health limits his movement, and he uses a hi-tech gadget to communicate by blinking. Reports are coming in that witnesses saw Hawking blinking like crazy as the truck took off from the intersection.

Hawking thankfully escaped unharmed, blinking, "It was quite a ride," police said.

Email ThisBlogThis!Share to TwitterShare to FacebookShare to Pinterest
Labels: the daily grind

I also have blinking wheel chair but mine has a built in colostomy bag. Great stuff Kiiki.