Cameron Diaz is an ass clown...and a Communist. 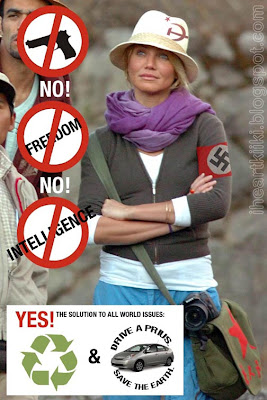 Cameron Diaz was recently photographed in Peru carrying around a green bag with a giant red communist star emblazoned on the side and the phrase "Serve The People" written in Chinese, which happens to be a slogan used by Chinese Communist leader Mao Zedong. Peru has suffered decades of violence due to communist insurgents. The Maoist Shining Path insurgency in the 1980's and early 1990's conducted a campaign of massacres, assassinations and bombings leaving almost 70,000 dead. You could say the Peruvian people weren't all too pleased with Cameron's choice of handbag.

Cameron was also overheard saying that Google should censor their search results in China, that the Holocaust never happened, and that 9/11 was a giant US Government set-up. Maybe she should move to NY and bunk with Rosie!

To me it sounds like one more "activist" celebrity being an ignorant uneducated fool. I guess that's just what happens when you drop out of school to become a model. Buy a Toyota Prius, pretend to be politically correct and save the planet. It's the recipe for success! All you Hollywood hopefuls have your work cut out for you.